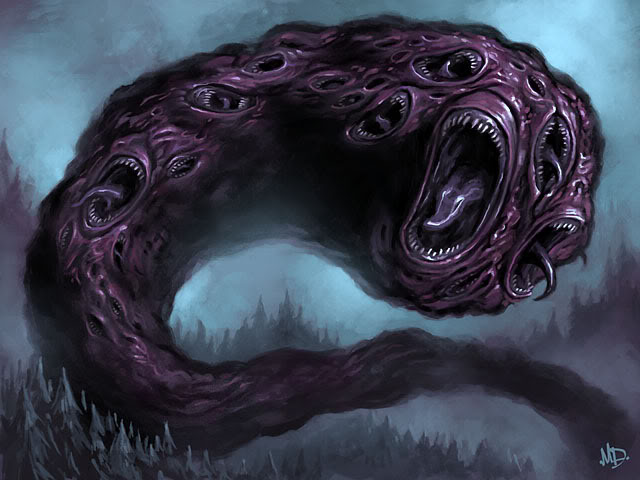 One of my recent campaigns involved the players investigating the tower of a mad arcanist investigating the Far Realms who clearly went to far and began to experiment with the powers they found there. These rules introduce a new spell, and rules for both afflicting an Infestation, and allowing players to recover from them.

In addition to finding the rules here, they can also be found on Homebrewery or downloaded as a PDF here.

An Infestation is an unnatural infection from the Far Realms that slowly transforms it’s victim. Infestations bypass disease and poison immunities, but cannot infect aberrations, constructs, undead, or creatures without a corporeal form.

To remove the Infestation, a character must use a Greater Restoration spell while not having any levels of exhaustion, or a Wish.

New Spell: Affliction from Beyond

Your touch inflicts a disease from another place. Make a melee spell attack against a creature within your reach. On a hit, the target becomes infested with your choice of Gibbering Madness, Cyclopian Visage, or Tyrants Limbs. Aberrations, constructs, undead, and creatures without a corporeal form are unaffected by this spell.

The creature’s body develops blisters that look like mouths and eyes and cause extreme pain. The creature has disadvantage on Wisdom checks and Wisdom saving throws, and may use take the Blinding Spittle action

If the creature dies while afflicted with Gibbering Madness, they become a gibbering mouther at the start of their next turn, with their memories, but none of their abilities intact. They also suffer from Madness (per the rules in the DMG), and are unable to distinguish one living creature from another in their unending hunger.

Blinding Spittle: One of the blisters pops, casting forth a glob of fluid at a creature you can see within 15 feet. The glob explodes in a blinding flash of light on impact. Each creature within 5 feet of the flash must succeed on a DC 13 Dexterity saving throw or be blinded until the end of their next turn.

The creature is wracked with pain as their eyes turn green and cat like, while their skin turns thick and spiky. They have disadvantage on perception checks based on sight. They may also take the rotting gaze action.

If the creature dies while afflicted with Cyclopian Visage, they become a nothic at the start of their next turn, with their memories, but none of their abilities intact. They also suffer from Madness (per the rules in the DMG), and blame their former friends and allies for their transformation.

Rotting Gaze: The creature makes a DC 13 constitution save, or takes 1d8 necrotic damage as they visibly age (the visible effects pass within the hour).

A fleshy appendage with an eyeball at the end of it emerges from somewhere on the head of the creature, or on the “top” of the body if they lack a head. The creature can take the Forceful Sight action.

If the creature dies while afflicted withTyrants Limbs, they become a Gauth with their memories, but none of their abilities intact. They also suffer from Madness (per the rules in the DMG), and believe that anyone trying to help them is attempting to harm or kill them.

Forceful Sight: The targeted creature must succeed on a DC 13 Strength saving throw or be pushed up to 15 feet directly away from the gauth and have its speed halved until the start of the gauth’s next turn.

This site uses Akismet to reduce spam. Learn how your comment data is processed.